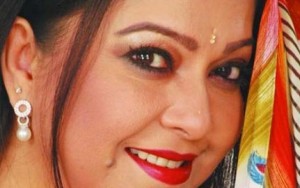 Parvin Sultana Diti is fighting cancer in Chennai at Madras Institute of Orthopedics and Traumatology (MIOT). At first she had been told that she had a tumor in her brain after got it surgery it did not cured properly. Since then she has been suffering from cancer. Last year September 2015 she has been taken to Chennai for the first time for treatment purpose but again she felt sickness and admitted to square hospital in Dhaka. As she was not feeling better again she has been transferred to Chennai for the second time.

For a long period of time she had been doing her treatment in that hospital. Unfortunately her cancer treatment reacted badly to her brain therefore she is in a bad condition right now. Her only daughter Lamia posted a status on 4th January in her Facebook account that her mother is dying and there is no hope for her life. Moreover she stated that the reaction of radiation is the main reason for her state. For the radiation she got perkinson disease which is in second stage. As a result of her disease she is suffering an unbearable pain also cannot talk to anyone. As a daughter to see a mother in such condition is so painful. Whoever has gone through these situation she or he can only feel it no one else. Cancer is such devastating sickness. It gives so much pain not only for the patient but also the whole family have to face it. I have seen a lot of cancer patients dying in an intolerable pain in a very slow motion. Patients and the family members are praying for their death to see them in such condition. Moreover the treatment itself gives so much pain to the patients which is really intolerable for the patients.

On the other hand there need a huge amount of money for this treatment which everyone may not afford. I have an aunt who is my mother’s one of cousin. Her husband had lever cancer and their financial condition is not that much well. They are typical lower middle class family on top of that he was the only earning member of that family. The family invested all of their savings for his treatment purpose but could not save him. When all the money has been finished he also gave up his life. My aunt was in grave danger after losing his husband. One side she had lost her husband at a young age having two little children moreover, she had no financial backup for them for living.

Cancer is a very common disease in whole world. If it is in a primary stage then there is a chance for survival but if it is in third stage or more then there is a little chance for living except miracles. Our famous writer of our country Humayun Ahmed also died from cancer. He also had the best treatment but could not resist it. Like other cancer patients he also died struggling with cancer.

Besides all the heartbreaking examples there is still many optimistic view on cancer patients. Sabina Yasmin one of our prominent singer in our country she had successfully struggled with cancer. She got her examination done from Singapore and her cancer was in fourth stage but luckily she is now healthy and cured from cancer completely. Likewise we pray Parvin Sultana Diti’s healthy life and hope that she will be cured from cancer.