Today at noon, Tareque Masud, Mishuk Munier, and another three persons died in an accident. Accident occurred on the Dhaka-Aricha highway in Manikganj when they were returning to Dhaka by a microbus. 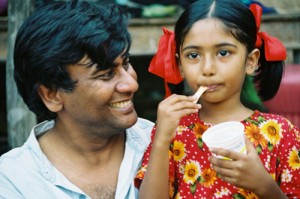 Tareque Masud is a famous award winning filmmaker who made the films Muktir Gaan, Matir Moina, Runway, AntarJatra, NaraSundor, and some other films and documentaries. Today at morning he with his team had gone to Manikganj to visit the location of his next film ‘Kogojer Phool’ and was returning by the same microbus. Accident occurred with a passenger bus when it was overtaking another bus. Tareque Masud’s wife Catherine Masud was also in the microbus. She was seriously injured.
Mishuk Munier, son of Martyr Munier Chowdhury, was the CEO of ATN news. He also taught video journalism at the Department of Mass Communication and Journalism of Dhaka University.
There were total nine persons on that microbus. Five died instant when the passenger bus hit it. The driver of the microbus also died.

This is shocking news for us. Our nation lost some intellectuals. We can call this ‘killing’ or road killing, and many people are killed by road accident every day because of our road structure, corruption in giving driving license, and other corruptions.