She wanted to go home. Crime court bailed her. The big tragedy happened here. Some brokers caught her when she was coming out from police custody. They bound her legs, hands and forced to go with them. Six months passed, she was not found. 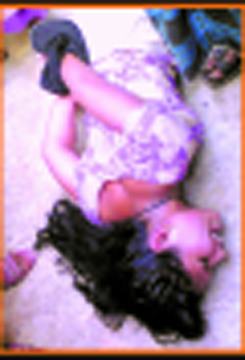 She was Sharmin, 16 years old girl, inhabitants of Kutubdia, Chittagong. On March 20, 2011, Sharmin came out from home for egoistic problem and took shelter in a home at Biazid thana, Chittagong. Police rescued her from that house when she was tortured physically there. But police arrested her for prostitution. The girl told police that she was assaulted physically and requested to free her, police didn’t care and sent her to the jail.

On March 22, 2011, the girl was freed from judicial court. The shame inhumane thing was happened when she came out from police custody after she was freed. Some brokers of brothels caught her in front of the court and forced her to go with them and acted of dragging forcibly. She requested earnestly to free her and to let her go home. But the cruel brokers bound her legs, hands, and hair with rope and dragged her in a CNG vehicle which was about 50 meters away. Sharmin was crying loudly to help her. Many people and police saw this inhumane scene but no one helped her.
Sharmin is not found till now after that. The picture was published on August 9 and report was published of that occurrence on August 10, 2011 in Dainik Azadi newspaper. Then Metropolitan Magistrate Mahbubur Rahman issued a role and ordered AC of DB to submit report of that incidence within 24 hours. DB applied for seven days for investigation and to submit report. But still now report was not submitted.

After 10th August, general people, social workers, human organizations protested this occurrence. Chittagong human foundation president Advocate Zia Ahsan Habib with two others created a three members team themselves to investigate the whole things. They said that the girl was raped by others but police arrested her for prostitution, police did not arrest the rapists. In court, some brokers are always ready for such case. Brokers tried to keep bail of such prostitution cases; even they have some advocates also. Brokers took these girls to their brothel after bail from such cases. Police helps them by arresting girls under prostitution and police took money for this.

2 thoughts on “A sad story of a girl – Sharmin”