Bangladesh win by two wickets against England, match no. 28, Group – B, Bangladesh vs England at Chittagong, ICC Cricket World Cup 2011.

Bresnan to Mahmudullah, FOUR, Mahmudullah has done it! Bangladesh have done it! What an a partnership! Brilliant victory is sealed by Mahmudullah punching a drive through the covers. The Bangladesh players come streaming onto the field, Mahmudullah stands arms aloft and the World Cup party is back on! 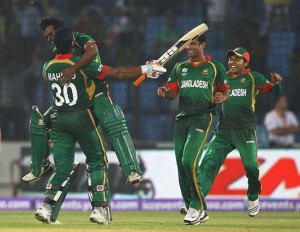 They’ve dished up another World Cup classic but it’s Bangladesh who are celebrating. Incredible result under the most intense pressure, fantastic scenes in Chittagong! At one stage they were 169 for 8, all but out of their own tournament before Shafiul suddenly turned the game on its head by swatting boundaries off Swann in the 42nd over and the belief came flowing back. All of this after being steamrolled for 58 the game before. Shakib is in tears, that’s how much was at stake.

Even the groundstaff are doing a lap of honour, might be quite the party in Chittagong tonight. Fair to say England were poor this evening, again. 23 wides tells its own story but in the end it was Shafiul’s blazing belief alongside Mahmudullah’s calmness that took Bangladesh over the line. 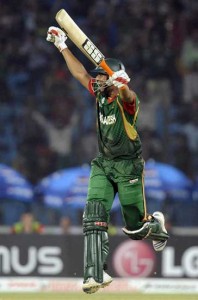 The Bangladesh cricket team definitely was the perfect example of this belief after the way they bounced back against England in a dramatic and nail-biting game to keep their quarterfinals hopes alive in the ICC Cricket World Cup yesterday.

The thrilling two-wicket victory came through a valiant batting effort from number ten batsman Shafiul Islam who shared a 58-run partnership in a ninth wicket stand along with Mahmudullah Riyad to script one of the most fantastic victories for Bangladesh cricket.

With a run-a-ball 24 Shafiul became the real hero in the end as his effort hauled Bangladesh back from dead. When the lanky batsman came to the crease Bangladesh still needed 57 runs to win the game and with this scenario half of the stadium became empty but Riyad (21) and Shafiul staged a brilliant fightback to achieve the target of 226 runs with one over to spare. The fortunate ones who kept their hope alive till the very end erupted into joy once Riyad stuck a boundary through cover against Tim Bresnan in the last ball of the penultimate over.

Shakib Al Hasan’s men dreamt against all the adversities after their heartbreaking defeat against West Indies and the dream was finally fulfilled through a clinical bowling and batting display in front of a capacity-crowd at the Zohur Ahmed Chowdhury Stadium in the port city. The Tigers breathtaking victory also brought back enthusiasm amongst the millions cricket crazy fans in the country.